Today my back, shoulders and arms ache. Physical reminders of the ache in my heart after Selection Day. I posted before about trying to prepare for what the day would hold. I know now that it is a vain pursuit, nothing can prepare you. When we arrived at 6:00am daylight was just struggling to peak through the night, the line of people stretched as far as the eye could see and as the day wore on we saw it double back again on itself. There were thousands upon thousands of hopefuls. I nervously took my place at Gate 1 as a greeter/patient escort, I looked at the 10 nurses and translators waiting just beyond the gate with eager smiles, clipboards and pens in hand waiting. Without any fanfare the gate opened and the first people began to walk through, I met my first person with a smile and an outstretched hand, we walked up the stairs together and up to a nurse who’s bright smile greeted the woman, “Bonjour!” I turned around and the line that seemed to never end had formed, I looked out at 75 faces of quiet strength and hope and was overwhelmed by the thought, “This is happening right now. My smile was made for such a day as this.”

As the day wore on I moved to various stations around Gate 1: directing patients to the next gate, escorting eye patients we couldn’t help to the exit, escorting some patients from the nurses to the eye clinic and playing with little kids in the line. I saw almost every one of the 6,000 that walked through the gate, I saw a look of joy that I don’t think there are words to describe, I held a woman as she silently shed tears for her untreatable condition, I saw mothers dancing to the next gate and fathers quietly shuffling to the “no” gate with their baby hidden under a blanket in their arms. 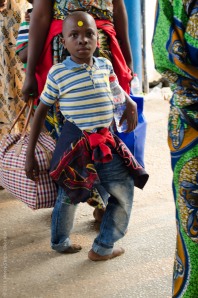 And I saw a lot of deformities; cleft lips on babies and adults, windswept legs, bow legs, goiters, tumors, burns, missing limbs, missing eyes, cataracts, and things I don’t even know what they are! But I was never disgusted or overwhelmed. I stooped down to say hello little kids, shaking their tentative outstretched hands (most have never seen a white person), I picked up babies and cooed, “Bonjour jolie bebe!” (Hello beautiful baby), I held hands, smiled like crazy and listened to people speak in French not understanding anything other than the pain in their voice and I would pat their back or put my arm around them and silently say a prayer for them.

The above was enough to make my heart full and heavy but there was one family that shattered my heart.

This is my nephew Henry, I love this kid. At nine years old he’s a bundle of endless energy. Henry was born with hip dysplasia, for which he was promptly treated and now lives the active lifestyle of normal kid with none the wiser.

I met a boy who looked about Henry’s age on Selection Day. He was mute, unable to walk, one arm bent awkwardly and lacked control of his one good arm. His eyes darted in all directions clearly trying to take in what was going on as his mom dragged him inch by inch through the endless line. When I saw his mom struggling I mentioned to our team lead they needed help and we immediately went into action, two chairs were brought to the front of the line, the mother and I started carrying the boy up, some men jumped out of line to help and after a few shuffled seconds the boy sat waiting, the mother at his side looking relieved and expectant.

The line continued to move forward one patient at a time until it was the boy’s turn. The nurse walked over and stooped down, gently examining his limbs and talking to the mama asking questions. Another nurse was brought over to consult and it was determined there was nothing we could do to treat this kind of palsy. The mother’s shoulders sank, the weight of her son returned to her. In that moment I saw Henry and thought how if he had born in Africa his condition might never have been treated, how it could be my sister in law sitting in that chair holding back her tears. In that moment I felt a million strings connecting me to this mother and son and I knew I had to do something, anything to help them no matter how small it seemed.

The mother wearily stood and reached out to again drag her son and I put a hand on her back and said, “I’ll carry him.” I doubt she understood my words but she backed away as I moved in to scoop the boy up in my arms. She and I walked in silence through the gate, up the stairs to the “No” exit. We continued down the hallway and across the sandy field, her son straining to speak, his good arm found a spot on my shoulder and he clung to it. Somewhere along the way I realized his jeans were damp and I smelled distinct aroma of one who’s soiled themselves. My broken heart began to weep and I prayed for the boy and his mama.

We arrived at the prayer station where I sat him down, his mom said something to me in French I didn’t understand. The boy’s one good arm grabbed me after he was seated, the grip of a healthy boy wrapped around my wrist and sounds tumbled out his mouth. His eyes focused on me for a short moment and all I could do was smile, lean in and kiss the top of his head, “Au revoir.” I walked away from him and his mom devastated and knowing that after they leave the prayer station she will again carry this burden.

The day wore on, the sunlight slipping into night, headlamps were brought out, Land Rovers positioned to shine the headlights towards screening stations, and through this my smile never wavered. It wasn’t until after I directed the last patient through the next gate and was told it was time for me to go that I let the day catch up to me.

It can be hard to understand or make sense of the how’s and why’s but that is not my job. My job is to love others. And I am so thankful for that long day, so thankful for the thousands of people we will be able to continue to love as they are admitted to our little ship and will be healed, and excited for the next ten months of love, hope and healing.

7 thoughts on “The One That Got Away”